Posted by Larry Willis at 11:47 AM No comments: 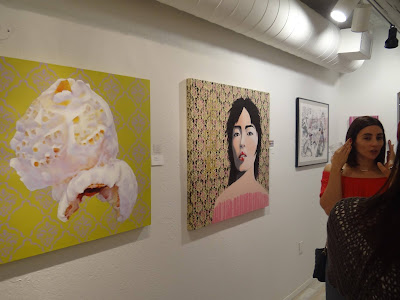 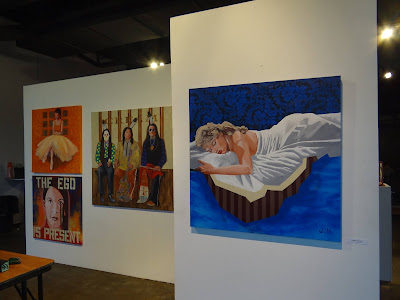 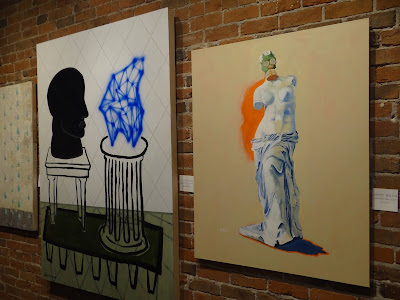 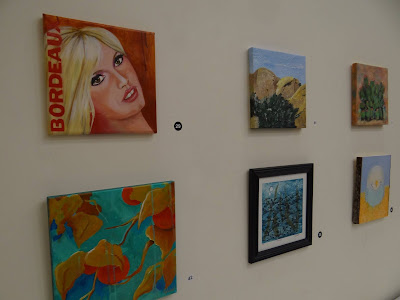 BID UP
AT THE MESA CONTEMPORARY ART MUSEUM uper left 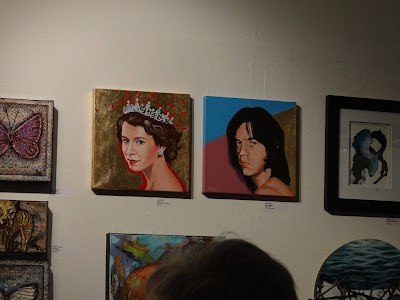 Posted by Larry Willis at 11:09 AM No comments:

ON PAINTING
Painting is an art that reached it's peak during the renaissance. Since then, applying paint to a surface has been experimented with in almost every way. Painting has often been declared dead. So in an era when painting is seldom considered on the cutting edge of contemporary art, why pursue it?
When talking about Lucian Freud after his death an art critic from England said in effect that we talk about the stars of conceptual art but it's paintings that we love.
In my work I use elements of abstraction and various degrees of realism to achieve a desired affect that varies from piece to piece. Inspiration in much of my recent work is taken from popular culture, especially the transient nature of things, like fame and fashion, the persona we create in our minds about famous people we know only by the songs they sing, the parts they play and what we read in magazines. We come to love or hate people we have never met by the fables invented about them. By extension we may also create persona for ourselves and play out the parts based on these illusions. I also like to riff on art, like a jazz musician quoting passages or giving it a new spin, in a continuum of traditional themes, especially imagery that has entered popular culture. Some works are more lyrical and others more narrative. I love art and the varying creative processes. I brush spray splatter drip and stencil the paint, whatever it takes. I have always created because I enjoy it. While art can make one think, and the best art does. I believe the main motivation should be the joy of doing it. It has been said that van Gogh suffered for his art. Perhaps his art eased his suffering.
Posted by Larry Willis at 11:04 AM No comments:

BACK
My computer has been down for some time so I havent been able to post. Had a few sales recently, still have more than Van Gogh in his lifetime so I can't complain. I was recently thinking about how I was once told that artist shouldn't paint what they like. I think most artist do what they want so this theory is hogwash. More on that later. Nice to be back.
Posted by Larry Willis at 9:37 AM No comments:

The year started off with a solo show at Urban Bears hosted by 9 the Gallery.
There was the contnuation of the Southwest Invitational at the Phoenx Airport Museum. 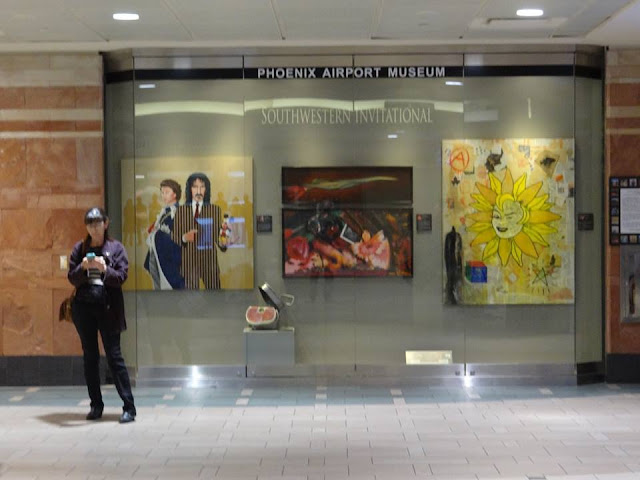 The 7th Year exibit at the PUSH Gallery 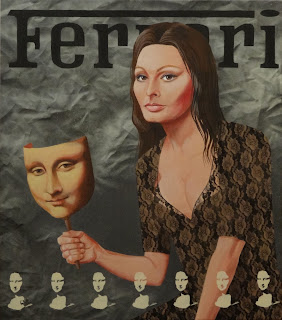 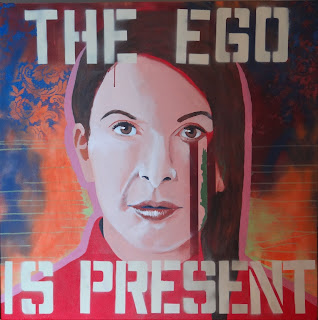 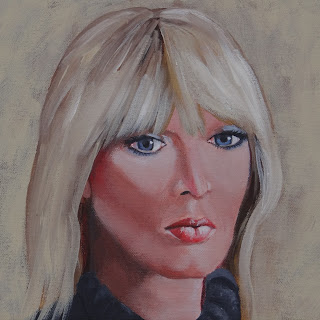 Posted by Larry Willis at 9:24 AM No comments: 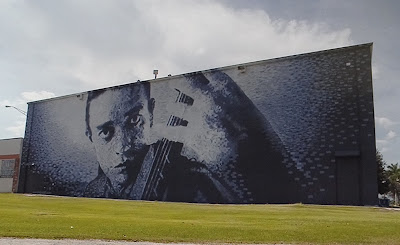 Jaco Patorius Painted on a wall by someone that can paint

I just watched a documentary about Jaco Pastorius. Sad that such a great bass player died so young. Too bad the Rock & Roll Hall of fame (& others) has a negative view of people who can really play. Progressive Rock sometimes gets out of hand but those people know their instruments. The closest the Hall has gotten is Pink Floyd. It’s like what is considered art. Good painting and sculpture are considered too old fashioned. I do like newer pop and rock but to say someone has no sole because they know their instrument is stupid. Brad Buxer once told me the Jetzons fans didn’t care that he studied music at ASU, they would be more impressed if he was on heroin. That kind of describes the Rock and Roll Hall of Fame. Enough of these Mickey Mouse stars lets have someone who can really play.
Lets have artists that can draw.

Posted by Larry Willis at 12:18 PM No comments: 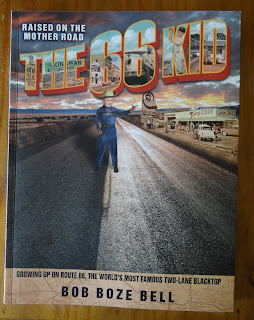 I have for a long time thought about putting down in righting my life. Not that it’s more special than anyone else but just to do it. I recently read Bob Boze Bell’s book The 66 Kid and as I read it I thought a lot about my own earthly sojourn. I’ve read several of Bell’s books but I enjoyed this one the most. I can’t pinpoint why exactly, perhaps it’s because he saw the Beatles a band that had a big influence on me. “I bought one of Bell’s comics because it dealt with the Beatles.” But I did see Hendrix, the Stones and Led Zeppelin among many others. My brother even had a meal with John Paul Jones, Bass player with Led Zeppelin. I saw half of the Beatles, McCartney and Starr; likely I even heard them better. I never played Little League ball but I have been to some ball games. Perhaps it was being raised in the West about the same time, watching some of the same cowboy shows on TV. I always appreciated the humor in his New Times cartoons. The humor is here too, but there is feeling one doesn’t find elsewhere. The book is full of quotes that fit the text perfectly. The book is also full of artwork and photos that illuminate the text. I have to say that I enjoyed this book and recommend its reading to all. It was a much quicker read than the Naifeh/Smith book Van Gogh The Life that I finished after it was again brought to my attention. I also recommend this book to anyone interested in van Gogh. 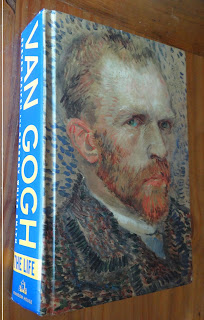 Posted by Larry Willis at 11:16 AM No comments:

About My Art Matters

Larry Willis
No animals were harmed in the production of my art. For me art is fun. Unlike some artist I don't think it shakes up the world. No art defeated the Spanish Armada.